I was excited to really start my visit to New Zealand. I had arrived at the Auckland airport two days earlier at 5:00 am and was picked up by my poor sleep deprived cousin. After a day of recovery with him, I took the bus to Warkworth where another cousin collected me, and I visited with him and his wife until the next morning.

Frosty, misty morning at my cousin’s place in Kaipara Flats.

Then came the big test, the part of my trip I was most worried about: getting my rental car and driving on the wrong side of the road (for this Yank, anyway). I had been to New Zealand before but had taken buses or relied on others to drive so this was new for me. After driving around Warkworth for a bit and repeatedly wiping my sweaty hands on my leg, I was ready to hit the highway to the Bay of Islands. Well, almost. The windshield wipers and turn signals are reversed in most cars in New Zealand compared to our cars in the U.S. so when I signaled to enter the highway I actually turned the wipers on. This would not be the last time. 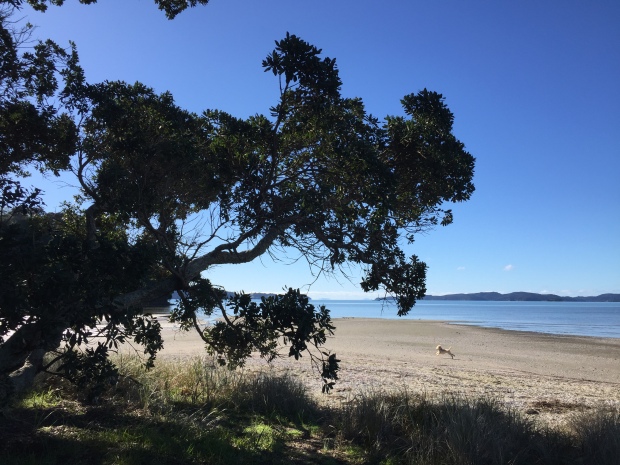 Not long after heading north from Warkworth, the road became steep and twisty but the speed limit remained 100 kph despite being accompanied by signs that read “Slow Down High Collision Area” and other signs with large arrows warning of sharp curves ahead. I became a champ at pulling over into little lay-bys to let native drivers pass.

Because I was taking a largely coastal route, I was able to pull off the road and take breaks at some gorgeous beaches. It was winter and off-season so the little vacation villages and holiday parks were only lightly populated.

Coming from an American summer with Daylight Saving Time in effect, the early darkness of a New Zealand winter day took me a little by surprise and it was almost dusk as I drove onto the Russell-Opua car ferry. I had been to Paihia a few times before so I felt pretty confidant I’d be able to find my way to my AirBnB even in the dark. After at least four wrong turns I declared victory when I arrived at my home for the next few days.

I settled in and then went back out to wander around Paihia for a while. I was tired and still adjusting to the time change so after stopping at the Four Square for some provisions I headed back to the AirBnB for the night.