One of the many benefits of renting a car was the ability to wake up in the morning, drink some tea, and choose my own destiny. Or at least the day’s destination. On this day I decided to explore a little farther afield from Paihia than I had done on previous trips.

My main destination was the Kawiti Glow Worm Caves in the Waiomo Valley, only about a 20 minute drive from Paihia. The Kawiti Caves are just outside the little town of Kawakawa, a place with its own peculiar attraction.

Kawakawa is home to the Hundertwasser Toilets, designed by the Austrian artist Friedensreich Hundertwasser. The main drag in Kawakawa is only a few blocks long and on my first pass I drove right by the toilets without seeing them. I ended up at the train station but because it was off-season the Bay of Islands Vintage Railway that runs through town had no trains scheduled. Bummer.

Entry to women’s side- Hundertwasser toilets

Next stop was the Kawiti Glow Worm Caves. The Waitomo region has the most famous glow worm caves in New Zealand but the Kawiti Caves aren’t as jammed with tourists and are much cheaper to boot. Glow worms do just that, they glow in the darkness of the caves and look like stars in the night sky. Our group carried lanterns as we walked through the chilly cave while the guide told us of the Maori history of the site. We got to see Elvis, a 75 year old eel who is quite the local celebrity, in the stream that flows beneath the cave’s elevated boardwalk.

Glow worms are pretty weird and wonderful and visiting a cave that displays them is a great way to spend time in New Zealand. When we got to the featured spot our guide told us to switch our lanterns off and look up. In just moments tiny pricks of light began to emerge from the blackness of the cave’s ceiling until it resembled a clear night with a new moon. Most were yellow but some looked more blue or green. We were not allowed to take photographs because the flash could disturb the glow worms. 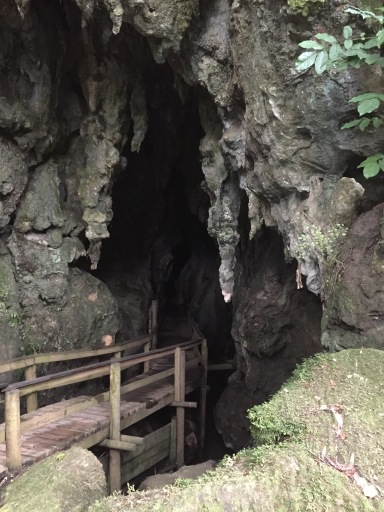 Entrance to the caves

This means you, Yank!

As I left Kawiti Caves I saw the above sign. It’s not uncommon in tourist areas to encounter signs reminding those of us who live in a right-hand drive side kind of world that we weren’t at home so don’t be stupid. Probably safer for everyone.

I had thought about taking a walk along the Haruru Falls track once I got back to Paihia but the threatening sky changed my mind. Instead I stopped there on my drive back from the caves and was immediately greeted by what I dubbed the “Haruru Falls Welcoming Committee.”

The falls are located on the Waitangi River and the word haruru means “noise” in the Maori language. If you’re in Paihia it’s a pretty nice walk on the trail that follows the river from the Waitangi Treaty Grounds to the falls.

The sky was looking stormier than a teenager who’s just been told she’s grounded so I thought I would find a spot to spend the rest of the afternoon indoors. The cool little town of Russell (site of the first permanent European settlement and port) is just a short ferry ride across the bay from Paihia. I decided to cross the water and get some lunch. From a previous trip I remembered the Duke of Marlborough Hotel and it promised to be a fine spot to eat and relax and look out onto the soon to be rain lashed bay.

While I have some friends who plan every detail of their trips in advance, I’m more of a “let’s see what happens” kind of traveller. I do the important stuff, book the flight and car, at least the first and last night’s accommodations, and create an vague outline of what I’d like to do but that’s about it. As I stepped off the ferry and walked up to the Duke of Marlborough Hotel I could feel those planner friends mocking me because the hotel was closed for renovations.

The rain was starting to fall but I was getting used to the wet New Zealand winter so I pulled up my hood and wandered around to see what else Russell had to offer. I hadn’t wandered much before the heavens opened and the rain pummeled down. I spied the Russell Returned Services Association (RSA) just ahead of me and ran to its door. The RSA is a veterans’ organization that has chapters all over New Zealand and is pretty social in nature with most locations having a bar and/or restaurant and pool tables, dartboards, and other games.

On my first day in New Zealand, my cousin had gotten me signed up at his Titirangi, Auckland chapter of the RSA. You don’t have to be a veteran to join but you get a discount in membership if you are one. I got the discount even though my service was in the U.S. Army. So nice.

Armed with my brand new RSA membership card I entered the Russell RSA, shaking droplets off me like a dog. The place was nice and cozy with a blazing fire surrounded by couches and comfy chairs. I got a Speight’s at the bar and settled onto a couch with my book and whiled away the stormy afternoon with my feet stretched out to the fire.